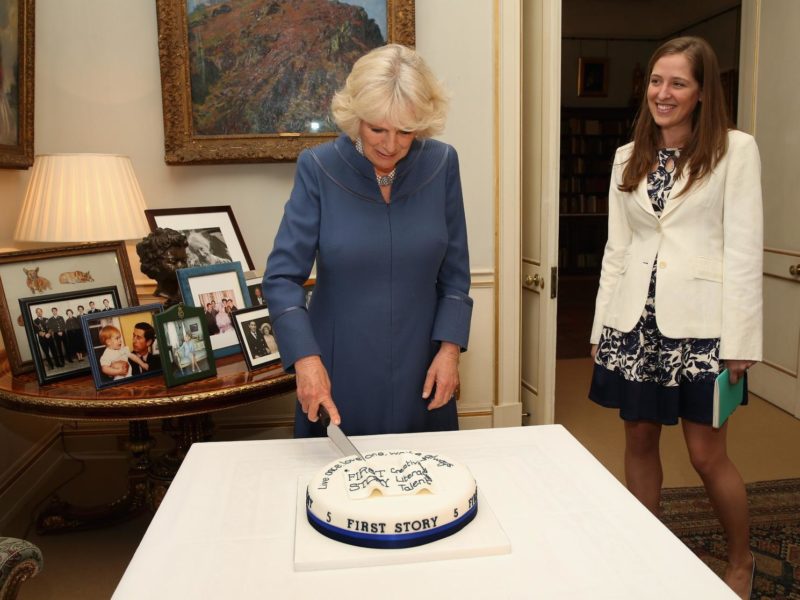 The Duchess of Cornwall, Patron of First Story, hosted a tea at Clarence House to celebrate the fifth anniversary of First Story. Attending the reception were students who have taken part in the charity’s creative-writing programme, teachers and supporters of First Story.

At the start of the tea Tanzina Khatun, a Year 12 First Story student from George Green’s School in London, said a few words. Tanzina explained the experience of First Story ‘has made me believe in my writing and given strength, as well as value to my voice’. Katie Waldegrave, Co-founder and Executive Director of First Story invited Her Royal Highness to cut a fifth birthday cake. The guests were then invited outdoors to the beautiful Clarence House garden, where they were introduced to Her Royal Highness by Katie Waldegrave and enjoyed a champagne tea.

The guests included supporters of the charity, including the authors Philip Pullman and Betsy Tobin, and author and co-founder of First Story, William Fiennes. Also invited were students and teachers who have been involved in the First Story programme from London, Oxfordshire and the East Midlands.

‘We are delighted with our involvement with First Story and honoured to be invited to its prestigious fifth birthday tea. Rukiya, who thanks to First Story is now an accomplished writer, and I had a wonderful time. First Story has had a very significant impact upon creative writers at Oxford Spires. We have performance poets planning a poetry competition trip to Berlin, several moving publications and Azfa in Year 13 who has worked closely with First Story has just been awarded the prestigious Oxford University Tower poetry prize. First Story has helped our students find their unique and powerful voices.’

BACK TO BLOG
Next Post: First Story in Harper’s Bazaar