Chloe took part in First Story’s intensive Writer-in-Residence programme. She went on to study Sociology at university — the first person in her family to do so — and continues to write poetry.

“I come from a working class, single parent family. I grew up on the outskirts of a housing estate in Yorkshire. I’m dyslexic and I’m dyspraxic — so essentially I am every teacher’s worst nightmare!

Before First Story, my ambition went as far as getting out of bed and putting on socks in the morning. I wasn’t for school. I didn’t think I was going to get anywhere.

Mrs Parr was the librarian at my school and I got on with her really well. She invited me to join First Story and I thought: well, there’s a trip [to the First Story Festival] on Thursday. On Thursdays I had science, so I was like: you know what? I’m out of here! So I went.

I did the festival in Oxford and I had the most amazing time. But the trip that turned it round for me, was going to the University of Huddersfield [for a First Story regional writing event]. I got to the university and there’s this massive canal, there’s a building there that is literally Hogwarts, and another building that is a massive space ship, and I’m stood — little Chloe, big frizzy hair, blonde acne — in the middle.

In the workshop I was asked to write about a tree. And as I’m writing about my tree, I’m thinking: for the first time in my life, I’m experiencing something. It was a feeling that I’d not experienced before. It was a feeling of solidarity. Every single person in that room was wanting to achieve the same thing — and be it writing about a tree, it doesn’t matter — they were all achieving the same thing.

I got chatting to some the undergraduate students who were volunteering that day. They were on a creative writing and English literature course and it was clear that they were normal people. Now in my head, I had it that people at university strut around like in their high heels and a brief case. But they don’t. They were normal people like me. At that moment I was like, do you know what, I can do this.

I did my anthology and the book launch, but then my First Story experience didn’t stop there. I went to college, where I did 4 A Levels. They were in essay-based subjects. Dyslexic! My college said I am the most dyslexic person they had ever seen. I probably am, it’s fine. But I got ABB. Grades aren’t everything, but that was an achievement for me.

I got into Huddersfield uni and I’m doing Sociology and that was a big achievement. Nobody in my family has ever been to uni, but I’m there now.

In January I’m moving to America, to Tennessee. A girl who’s never been out of Bradford before! I’ve not seen the world because we just didn’t have the money. I’m going to do a semester at East Tennessee State University. It’s a cool campus — there are zip lines, kayaking, bears! I’m going because I got a first in my first year of uni. That’s because I used the skills I learned from First Story and implemented them in my essay writing. Also, in my application for America, I wrote a poem. If I really want to express myself, I know that I have the skills to express myself through a poem.

Writing, for me, opens up many things. I am probably the most emotional person you will ever meet in your entire life. If a dog dies on the telly, I’m bawling. If a baby cries on the bus, I’m bawling with it. That’s just me, that’s just how I am. Writing gives me the outlet. I write down how I’m feeling. I might send it to a friend, I might post in on my blog — it doesn’t matter that nobody’s reading it, cos it’s out there. My feelings and my points of view are out there.

First Story made me share my ideas with other people. I had to stand up in front of our Writer-in-Residence, Nick Tozkeck (a mad man who does magic is a great explanation if you’ve never met him!) and I had to explain what I was saying. Now at uni, presenting about some geezer called Karl Marx, talking about all his ideas of capitalism, I put my spin on it and I feel confident to do that because of First Story.

What I want to say is, all your stories can be written on paper, but it’s your choice to create your own story. It’s what you do now, what you get out of school, and what you get out of the First Story programme, that will have a massive impact on your future. You don’t know what’s round the corner…” 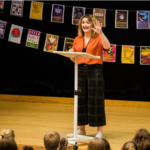