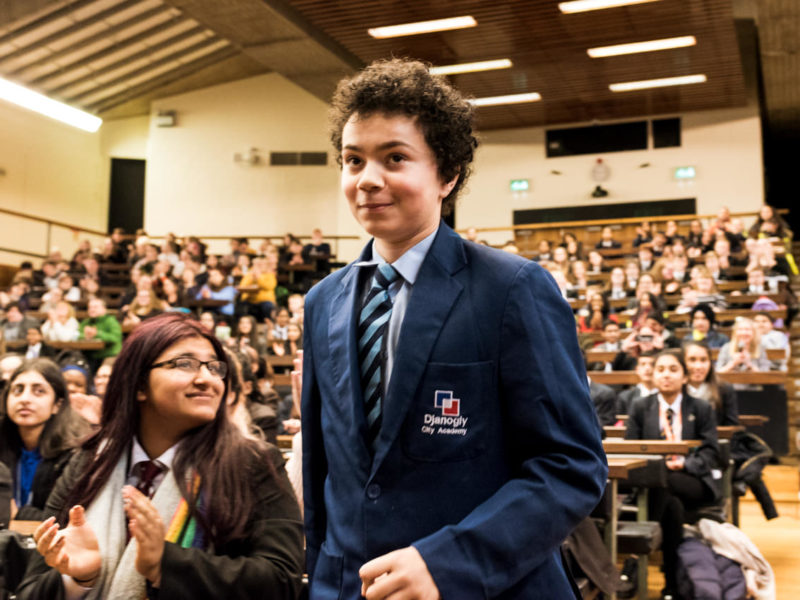 It’s been another great year for our Six Word Story competition. With the sheer variety and ingenuity on offer, shortlisting this year was tough. Somehow we settled on our top 12, before handing over to Juno Dawson to select her overall winner, which she announced at this year’s Young Writers’ Festival.

The brief, as ever, was deceptively simple: we asked for stories that were concrete and specific, not abstract or vague. We insisted that the best six-word stories have elements of character, setting, dialogue and narrative structure. We should know; we’ve seen a lot of six-word stories in the six years since the competition began!

And the winner is

This story impressed us because it’s both morally profound and linguistically precise; proverbial as well as plot inducing. As Juno said: “Sometimes, simple can be very effective. Samuel’s entry was smart and stylish, but also coldly brutal, which felt appropriate given the subject matter.”

What better way to reward good writing, than to inscribe an exemplary story on a pencil, to inspire others as they write? This winning entry will be printed on a set of 250 pencils, which will be sent to our winner and his school. Bravo Samuel!

In no particular order, here are the rest of the shortlisted stories — all strong contenders, with much to commend them.

This is an intriguing story which, at first, seems very normal — until you start to question why someone would not expect to grow. It hints either at an unusual fantasy reason, which causes someone to grow unexpectedly, or towards a real illness, which the character has defied the odds to overcome. Or maybe the growth is metaphorical? Was the character hoping to grow? We just don’t know.

This story was very popular with the First Story team. It merges tragedy and comedy brilliantly, to produce a foreshadowed catastrophe. The way it uses dialogue and rhetorical questioning really adds humour. Very clever indeed.

If this were the opening sentence to a story, you’d be sure to read on. Simple language insinuates a far deeper and more complex plot. Who and where is the person speaking? Who is she afraid of and why? If he isn’t gone, what problem might he cause? The reader is left to dream up their own antagonist, from whom they might want to hide.

Often the six-word stories we receive are quite dark and serious — which we totally embrace — but it’s great to see some comic ones too. This story had us all giggling and speculating what could have inspired the subject. We especially likethe second sentence, which introduces a problem that a longer form story (were it to exist) would go on to resolve.

We love how creepy this one is. Evoking ghost stories and romantic fiction all at once, this little story has you feeling dreamy and spooked. Not an easy combination to write! The use of the ellipsis is also really effective because it sets up the harshness of the punch line.

In this story, we see a clear example of how there is power in what is not said. This is especially true in a lot of crime and mystery writing, where it’s vital to construct intrigue. What were her shoes doing on the roof? Is she safe? Will the location of the shoes prove to be a clue? We long to know.

Why did people stop her? Was she about to do something foolish in the name of love, like in Romeo and Juliet? Or maybe people wanted to prohibit the love, so they stopped her for less altruistic reasons? This is a really intriguing story, opening up a whole variety of possibilities, which is exactly what a good six-word story should do.

This intriguing story could imply a variety of plots: is it about a celebrity who is disenchanted with the life of fame? Is it about school photo day, where a person who usually feels unseen by the world is forced to be photographed? Either way, it conveys very neatly the lack of enthusiasm felt by the subject and we cannot help but wonder why.

One of the darkest we read this year. We don’t know if the suffocation is literal, with the subject actually locked inside a suitcase, or metaphorical, perhaps with the subject trapped by a police case that’s not being looked into for some reason. This is a great suggestion at a crime plot. The drawn out alliteration and short sentences really add to the feeling of desperation.

This is a fine example of how effective juxtaposition can be; that one word ‘murderous’ throws everything we understand about the other words into chaos. Suddenly, all our gendered expectations about the innocence of sweet little girls in pink dresses are subverted and instead we’re imaging deceptively cute psychopaths! What have these little girls done? What are thy capable of? We want to read on and find out.

This is a very subtle narrative that opens up a load of questions: Why is the narrator surprised to be awake? Who turned the lights off? And whose shadows can they see? We love the rhythm of this story. It’s almost as if we process the simple sequence of actions at the same speed as the confused narrator, which gives the story a disorienting feel.

Well done to all our shortlisted writers and thank you to everyone who entered this year’s competition. We’ll be celebrating all of these excellent stories throughout December, via our digital campaign, #12Stories. Look out for some famous writers performing each of the stories on our Twitter and Instagram feeds!

And if you didn’t get a chance to enter the Six Word Story, worry not! First Story’s 100-Word Story competition opens on 6 January 2020.