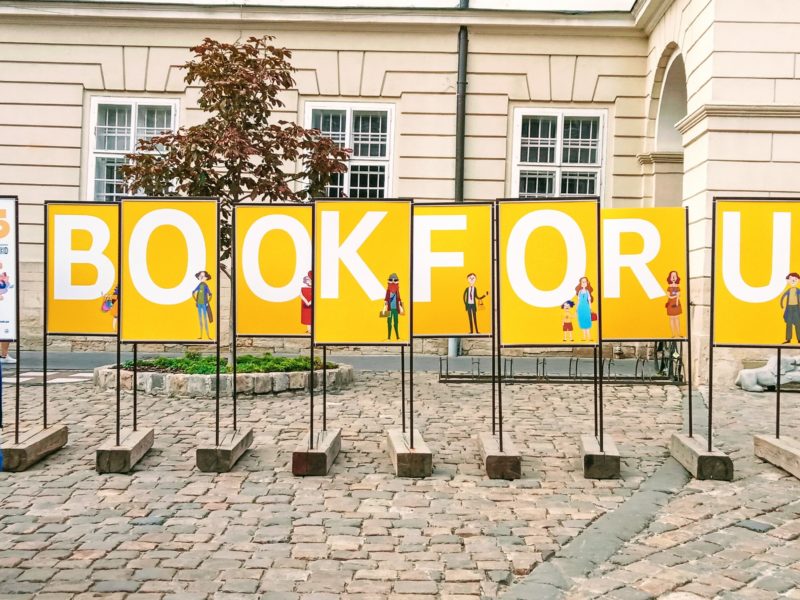 I’ve recently returned from six days in Lviv, Ukraine’s cultural capital and one of Nottingham’s sister UNESCO Cities of Literature. Like Nottingham, Lviv is a young UNESCO City of Literature, rich in literary heritage.

Lviv is a place of exceptional coffee, beautifully faded mansions and generous hospitality. It is a place of cobbled streets, incredible music and underground rivers. Its hot chocolate is so thick you can stand a spoon up in it, and if you’re lucky, you might just spot an angel on rollerblades weaving her way across the main square, under the gaze of Taraz Shevchenko, the founding figure of modern Ukranian literature.

During our time there, we were whisked on a whistle-stop tour of its many literary treats: we attended sell-out concert halls celebrating the lives of long-dead dissident poets whose legacy is still alive in the hearts of contemporary Lvivians; we toured its cemetery, Ukraine’s equivalent to Poet’s Corner; and we shared our practice with colleagues from other UNESCO Cities of Literature – Krakow, Norwich, Heidelberg and Edinburgh.

As we moved around the city, among many other things we had fascinating discussions about literary movements, language and their role in shaping a developing national identity.

‘I speak Russian with my parents, but with my children I want to speak only Ukranian, because that is the language of our future.’

We were there to contribute to UnderLitMove, a fringe programme of events programmed by the City of Literature team to complement BookForum26, Ukraine’s second largest book fair. Throughout our stay, the fair was buzzing with people of all ages, jostling to get close to the hundreds of booksellers, proof enough that reading and publishing is alive and thriving here in Lviv. BookForum26’s programme boasts over a thousand events and this year included a reading by Arundhati Roy whose first novel, The God of Small Things, was translated into Ukranian for the first time in 2018, more than 20 years after it took the English-speaking world by storm.

UnderLitMove is short for ‘Underground Literary Movement’, which is fitting given the city’s history of occupation. Lviv’s political history is complex. The city has been at the crossroads of East and West since its founding. Throughout much of the 20th century its maps were drawn and redrawn with German and then Soviet occupation, and then of course, with Ukraine’s independence. Today, the pressure exerted by Russia in the Crimea is keenly felt.

In times of political upheaval – and this is a city that has evidently experienced more than most – literature moves underground too, and it was invigorating to be in a city which celebrates its revolutionary poets, writers and artists at a time when resistance is still very much at the forefront of many people’s minds.

One of the most moving events we attended was a public reading in solidarity with writers and political activists imprisoned by the Kremlin. In the bright September sunshine of Sunday morning, around a hundred people gathered under the statue of Ivan Franko, Ukraine’s greatest and most prolific literary hero, and heard letters and readings from those currently imprisoned. Many held placards reading ‘Our solidarity is stronger than Russia’s prisons.’

When I look back at my time in Lviv, I’m left with a real sense of a city that is hugely (and rightly) proud of its literary heritage and with an enthusiasm to foster literary activity as a way to understand its place in Ukraine and its relationship with the rest of the world, in a constantly shifting, and often tense, political climate. As the inexhaustible Bohdana Brylynska, the head of Lviv’s UNESCO team so eloquently put it, we need literature ‘as a means to discuss ourselves.’

The collective commitment to Lviv’s future success as a UNESCO City of Literature felt tangible as we toured the city, meeting its leaders, administrators and practitioners. I feel hugely grateful to have been able to share with them the work of First Story in schools across Nottingham, and look forward to seeing their plans for working with schools and writers unfold in the future, helping to inspire a new generation of writers and poets. If anyone can do it, Bohdana and her team can!

Jess supports our programmes in the East Midlands, and has a particular focus on writer development. Her background is in arts and literature, a field in which she’s been working for almost 20 years. She’s an enthusiastic champion for the East Midlands, where she loves to live and work, and for the region’s writing community.