Sally participated in First Story’s intensive programme at Hull College during 2018-19, working with writer Joe Hakim. Home-schooled for most of her life, Sally joined Hull College for Year 10. By her own admission she can be quite introverted but says her confidence has grown since becoming involved with First Story. Sally discovered her passion for writing through the workshops with Joe and says she now writes almost daily. She enjoys socialising with people who share her passion for writing and is determined to make a career as a writer. Sally takes up every opportunity that advances her towards that goal. After her work was published Hull College’s anthology Pity Me Not, Sally applied for and won a place on First Story’s summer residential course at Arvon. She has also read her poetry on BBC Radio Humberside.

“Before First Story, I wrote. I was discovering writing, through my English Literature class we were studying poetry, which piqued my interest. I generally always have a lot to say, even with silence I speak a thousand words, and sometimes I feel I have no one to say it to, and no way to say it.

When I came to First Story I was completely and utterly thrilled by the idea of a class every Monday, dedicated only to writing. I hadn’t really thought of it as more than a hobby until this brought it to the forefront of my mind.

One of the first things the experienced, published author that was running the course told us was: ‘Spelling doesn’t matter. Whatever anyone has said to you about writing having to be like this or like that, forget it. Writing isn’t about what someone else has told you, it’s about you.’

When my class was offered the chance of a creative writing trip, and I was the only one that seemed enlightened by the idea, I jumped at it and wrote my 300-word piece on what writing meant to me. Later, I discovered, despite my lack of belief in being picked for anything in my life, I’d been accepted.

The Arvon residential gave me so much more experience in writing just by meeting and hearing other people’s works for a week, it was like I was living through their experience and matching it with mine, witnessing the differences and similarities and seeing how I could improve my techniques.

But the most important thing I got from it, was ironically an unspoken thing: the way people wrote, they were all so unique, and that’s what made them so special, and that expressed so deeply that I have to find my own way of writing and use it! Just to write, because it doesn’t have to be a certain way, it doesn’t have to copy or be within guidelines, no matter what so many people say.

I wouldn’t have learnt that without hearing it first hand, because even though I thought I was mostly confident already, I was completely alone and therefore, only seeing things from a limited point of view. I needed that diversity.

And thanks to First Story, who heard my cry in the crowd, I was given the opportunity to work with such talented writers, tutors and students alike. I learnt so much about myself.

I didn’t realise until I got home, how much it had actually done for me. I started writing in a frenzy, coming out with all sorts of things I never knew existed underneath my layers of doubt and over thinking. And I understood how influential and important just a week away, focused on writing and not stressors, truly is.” 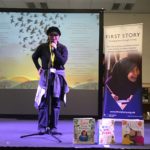