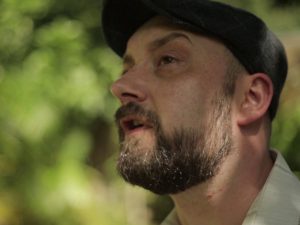 Joe is a poet who lives and works in Hull. He has performed at venues and festivals around the UK, including Latitude, Big Chill and Edinburgh Fringe Festival. Joe was co-host and organiser of WRITE TO SPEAK, a series of spoken word events and workshops that took in place at Hull Truck Theatre from 2009 to 2013. In 2016 he toured and performed with LIFE, a Hull-based punk four-piece band, performing on the UK leg of the Slaves European tour.

In January 2017 he travelled to Trinidad with The Roundhouse and Wrecking Ball Press as part of the TALKING DOORSTEPS project, assisting in the delivery of workshops and helping to forge international links between spoken word organisations and projects. In an interview with the British Council discussing the project Joe commented; ‘Writing is often seen as a lonely, solitary pursuit, and getting up on stage in front of strangers is very intimidating. So having people you trust around you is crucial for when you decide to take your poetry to the public.’

In addition to this, he is currently in the first year of a part-time MA in Creative Writing at Hull University, and works three days a week as a pawn-broker/Western Union agent.