Abigail completed First Story’s intensive creative writing programme at Melior Community Academy in Scunthorpe, during the 2018-19 academic year. She then won a place to attend First Story’s week-long residential course in the summer of 2019, alongside fifteen other talented students, at Arvon, Lumb Bank.

“Before I heard about First Story coming to my school, I wasn’t really too interested in writing but I signed-up because I thought it would be a fun way to pass the time. But as the weeks passed I discovered that I actually had quite a love for writing!

I think that was at least partially down to working with Nik Perring, which was a wonderful opportunity. He has the ability to break down that barrier between teacher and student and really make it seem like its two friends or colleagues working together. Its very professional because he talks to you like you know what you’re doing and like you’re an adult, which made me feel less like a child and more like an adult writer who could write great and mature things. He made me feel like my words were actually valued and he helped me see that I had a unique writing style.

Becoming a published author has been really fantastic. Sometimes people compliment me on my work and on my writing! It has helped with my creative writing in English classes because I feel much more confident now. Though I sometimes feel restricted in what I’m allowed to write, or in the ways that I want to write, I also feel like I’ve just got generally better and more varied ideas. I still prefer writing poetry but I’d say my short stories have definitely improved too!

This year, I got to perform some of my work from my first anthology A Different Train of Thought at the First Story Showcase, hosted by The Big Malarkey Children’s Literature Festival in Hull, which was really enjoyable. I felt like, because it was mainly a younger audience, they weren’t there to judge my work, but just there to really enjoy it. I have a little brother myself, and I like the idea that I encouraged kids his age to take up writing like I did.

I also got nominated to go on First Story’s Arvon residential earlier this year and was lucky enough to be chosen. I didn’t expect to get nominated, let alone chosen! When I found out I had been chosen, it was one of the best things in the world because it gave me such validation that my writing was actually good. Being there at Lumb Bank, and working with other young people who love writing, it felt amazing, like we were all really good friends who were able to give each other constructive criticism to get better and better.

Interestingly, during and since the Arvon residency, I’ve developed quite an interest in writing about feminist themes. Over breakfast, the other students and I used to have little debates and discuss political events at the time, and I guess that just inspired me to write on more controversial topics. I was also inspired by working with Rebecca Tantony, because she writes poems about female issues that I really connected with. I really aspire to write poetry like her and I think, in some ways, we kind of share a similar style.

I’m still writing, at school and at home. I like to write about things that I’m going through because I’ve realised that it really helps me to get through my difficulties and understand how to deal with them. Ultimately, though, being part of First Story has given me a voice. It hasn’t really changed the way I think about things, it’s just helped me find ways to express myself and it has shown me that there are people out there is an audience for my poems and stories, which I now cannot wait to share.” 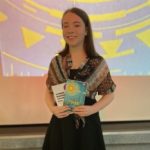