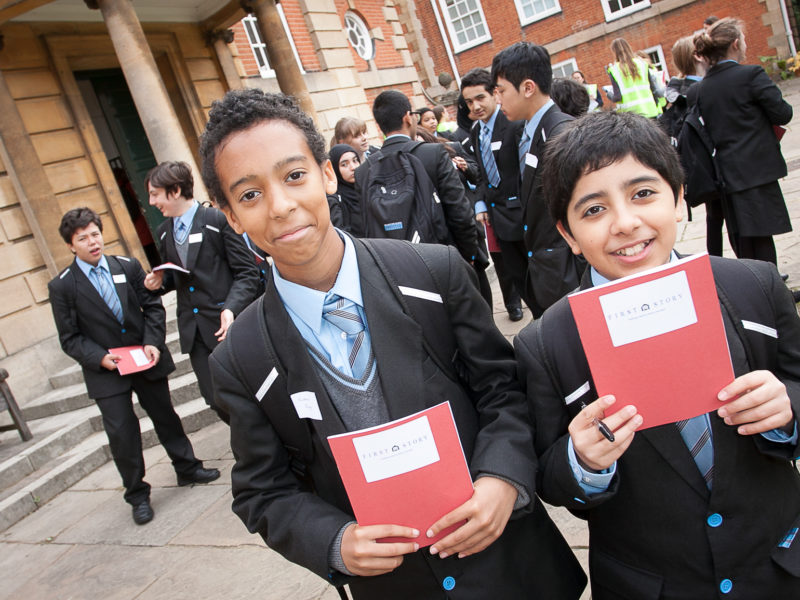 Over the last year, we have run the First Story creative-writing programme in 32 secondary school in London, Oxfordshire and the East Midlands. Some 700 students have participated in the project, writing an estimated 11,300 stories and poems.

Our 2012–13 programme was launched in September with the Young Writers’ Festival. Around 600 students attended this day-long celebration of young people’s creative writing, where they participated in workshops and listened to talks by writers such as Mark Haddon, Phillip Pullman and John O’Farrell. First Story student, Azfa Ali, opened the Festival, inspiring future generations of young writers.

From September to April, our acclaimed writers-in-residence led weekly workshops for up to twenty-one students. Writers set activities and exercises for students each week, and it was interesting for us to see how almost instantly the voices and work produced were distinct from one group to the next.

In addition to the weekly workshops, students were encouraged to enter a number of competitions. With the London School of Economics, we ran a competition open to students at all state schools fitting our profile. The twelve finalists were published in an anthology. Other competitions included our 100-word story competition which sees one winning postcard printed for each school (like the one above) and our six-word story competition with the winning entry (below) being printed on a pencil:

Across the spring term, First Story organised afternoons of creative-writing workshops at four regional arts venues: the Pitt Rivers Museum, Nottingham’s Galleries of Justice Museum, the National Gallery and UCL. Following a tour of the collections, our writers led workshops for students, helping to spur a crop of fantastic poems and stories.

As the programme drew to a close, First Story groups worked closely with their writers-in-residence to select and edit work for their schools’ anthologies. Celebratory book launch events were held, where students performed their work to family, friends and teachers. Particular highlights include a celebration in a school library with champagne and bunting, and a barbeque with an a cappella group.

Finally, sixty talented students and six First Story writers have just returned from a week of writing in rural Somerset for our summer residential. Daily writing workshops were interspersed with other activities – a hike through the countryside, ghost stories told by the bonfire and a production of A Midsummer Night’s Dream. In the office, we are now furiously editing a collection of evocative poetry and short stories that sprang from the week, as we look forward to our next exciting year of residencies in forty schools across Bradford, the East Midlands, London and Oxford.