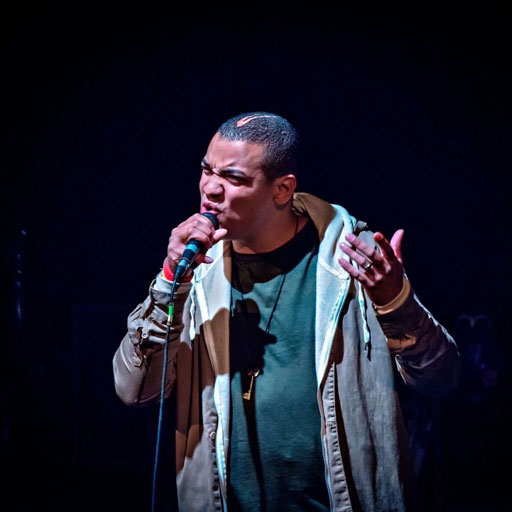 Testament is a Hip-Hop MC, writer, theatre maker and world record breaking human beatboxer. Born in North London and growing up Manchester, moving onto to study in West Yorkshire where he now currently resides. As a lyricist his critically acclaimed work together strands of rap, song and spoken word. Testament’s work includes the celebrated Hip-Hop album Homecut: No Freedom Without Sacrifice, as well as several spoken word performances for BBC Radio (1xtra, Radio 4 and 6Music). He is also currently Channel 4 Writer in Residence at Royal Exchange Theatre Manchester.

Testament’s theatre work includes WOKE, a one man show about rap music, feminism and fatherhood; and Black Men Walking which was nominated for BEST NEW PLAY at the UK Theatre Awards and for BEST PLAY at the Writer’s Guild Awards.

He’s worked with a diverse range of people from Archbishop Desmond Tutu, Grammy winner Corinne Bailey Rae, Ray Parker Jnr,  jazz legends Joe Lovano and Jean Toussaint, Mercury nominee Soweto Kinch to the originator of Hip-Hop himself DJ Kool Herc. He also won the BBC Urban Music Talent Award in 2007. In 2015 he wrote his first show the acclaimed play Blake Remixed – a personal response to the work of William Blake which had a successful run in Edinburgh Fringe Festival 2015.

Testament’s poetry has been published in several anthologies and has been used a teaching resource in the UK and in over 14 countries around the world.  He is also a international workshop facilitator, founding workshop company Hip-Hop Clinic in 2014 producing workshops in venues that range from schools, universities and stadiums, to prisons and park benches.

Testament was a judge for The BBC Young Writers’ Award with First Story & Cambridge University in 2019.