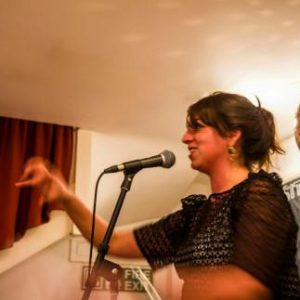 Michelle Madsen is a writer, teacher, and journalist. Performing poetry since 2007, Michelle has toured the UK and performed on stages in all sorts of places, from festivals to treehouses, from Singapore to Buenos Aires.

She is the founder and host of Hammer and Tongue London, part of the UK’s largest slam poetry network. Having made her small screen debut on the BBC’s ‘Why Poetry Matters’ series in 2000, Michelle has appeared on various other programmes including the World Service and NTS Radio. In March 2014, she published her critically acclaimed debut collection of poetry, Alternative Beach Sports.