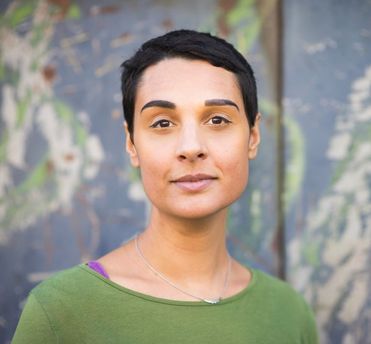 Jasmine is a poet based in London of mixed Sri Lankan and British descent. She writes, facilitates workshops in creative writing, and supports the development of emerging writers. She is also training to be an integrative psychotherapist at The Minster Centre, London.

Jasmine has been writing for many years and has performed in a variety of settings including the Tate Modern, The Royal Festival Hall, and various arts venues across London and the rest of the UK. Her debut pamphlet of poetry Everything We Don’t Say was published in 2009 with Tall Lighthouse Press, and she has done commissions for the Natural History Museum, Louis Vuitton, among others.

Jasmine has run creative writing workshops for a variety of organisations, including The Barbican Centre, The Southbank Centre, and for more local literature projects such as CityRead in Lewisham and Mental Fight Club in Borough.

She has just finished a post as Writer-in-Residence at the National University of Singapore, where she worked on her first full collection of poetry, and ran poetry workshops and other projects.