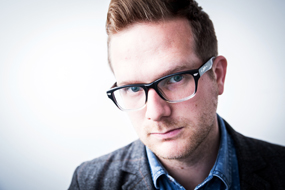 Adam is a storyteller and a writer of theatre, short fiction and film. His gothic storytelling show The Book of Darkness & Light will tour in twenty-two theatres in autumn/winter 2017. The show is a combination of original ghost stories and live violin music, provided by musician Ben Styles (Backyards).

His new storytelling show Shivers is a co-production with Square Chapel Arts Centre, Harrogate Theatre and is being produced by LittleMighty. The show premieres at Square Chapel in September 2017, with plans for a national tour in 2018. Adam has also written for Odd Doll Theatre on their new show Seaside Terror, touring in autumn 2017.

Adam is currently working on a new show called This Storm is What We Call Progress with Fringe First Award winning director Dick Bonham.

In 2014, Adam’s play Conscientious toured nationally visiting theatres such as Hull Truck, The Oxford Playhouse and Bradford’s Theatre in the Mill. The show was directed by Alex Chisholm and performed by Rachel Ashwanden.

For the past few years, Adam has been running creative writing workshops for a number of schools in the Yorkshire region, as well as for Harrogate Theatre and Opera North.

He is author of several other stage productions, including Little Red (Edinburgh Fringe 2008) and Bad House (co-written with Lucy Arnold, NSDF 2010).