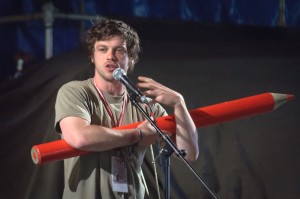 Adam Kammerling is the UK Hammer And Tongue Slam winner for 2012, Hackney Slam Winner 2011 and Brighton Slam Winner 2010. He performs all over the country as an MC and spoken word artist. He also facilitates rap and poetry workshops for young people at Key Stages 2-4.

He has performed at Glastonbury, Latitude and Big Chill Festivals, travelled to NY, Poland, Wales, Ireland and Scotland. He has been published in New York in arts magazine, New York Niceties, and in the UK in the Morning Star and in Rhyming Thunder, Burning Eye Publishing’s debut poetry collection. He has independently released rap albums, the Letters EP and Don’t Move, to excellent reviews. The Look Up 7” vinyl was released on Monde Green records and the forthcoming Formwork LP is his largest musical project to date. Has also featured as a successful battle rapper on Don’t Flop.

Adam was commissioned by the BBC Natural History Unit to write poetry to time lapsed video and featured as a part of the Big Story Festival in 2013. He has run writing workshops at The Roundhouse and Ovalhouse theatres and written commissions for Deptford Market Traders, Capital One and Ben Sherman.

Since 2013 Adam has led on poetry projects such as Word Cup, Flip The Script and Croydon Wordfest. He has worked as SPOKE Poet in Residence at Eastbury Comprehensive, and artist in residence at Catford Library for SPINE. As well as countless one-off writing/performance workshops with ages 7-18, Adam has worked as youth support at centres in Brighton and led Healthy Relationship workshops with Tender.